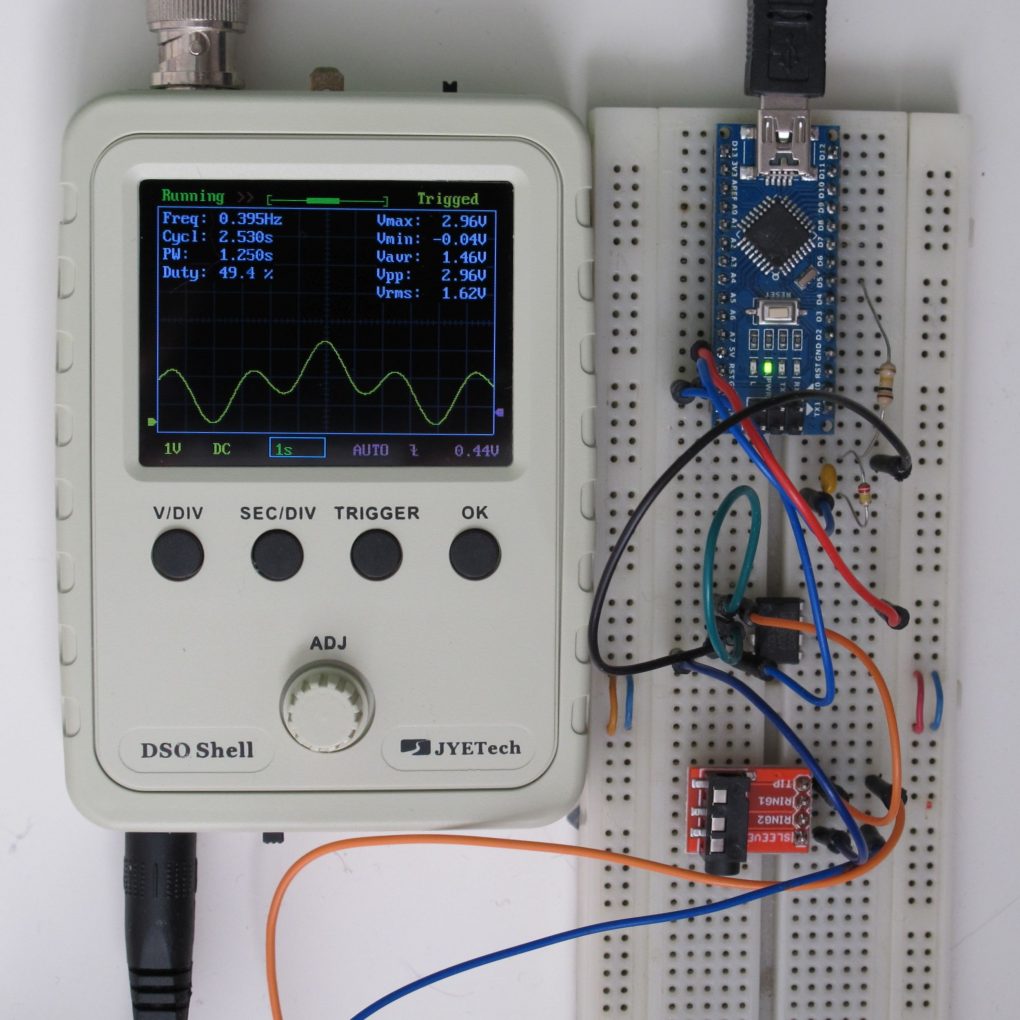 As Korg Volca Modular prices dropped recently to around 100 euro, it became a great and quite cheap introduction into the World of Voltage Controlled Modular Synthesizers. With additional Arduino and few components, you can ensure yourself many nights of modulation heaven (or hell, it all depends). So, how to connect Arduino to Volca Modular safely and throw some basic LFO? Let’s go straight to it!

Long story short: I used Arduino Nano. First thing – Arduino outputs 0 – 5 V level signals, Volca Modular can receive safely 0 -3,3 V on all its inputs (in fact specs are not so tight, but lets stick to official data). Second thing, as Arduino outputs only digital signals, so we have to find a way to transform then into analog ones. The plan is as following:

The circuit is a tradeoff between functionality and parts count. R1, R2 and C1 forms a voltage divider and passive RC lowpass filter. The amplification of this section is around 0,7 and cutoff frequency close to 5 Hz. 0,7 because we need to drop voltage from 5 V to 3,3 V (3,5 will do the job also). But where this 5 Hz came from?

Arduinos analogWrite PWM frequency (carrier signal frequency) is fixed and for Arduino Nano equal to 490 or 980 Hz depending on pinout choice.  Higher PWM frequency allow us to output higher CV modulation signals, so pin 5 or 6 with 980 Hz capabilities seems an obvious choice. The rule of thumb says the filter cutoff should be 1000x lower then PWM frequency and it is a good starting point for cutoff frequency calculation. In general:

You can use this great free online RC Lowpass Filter Design Tool for PWM to further explore the problem.

To get the R1, R2 and C1 I used formulas showed on schematic. For the designed simple RC filter, the peak-to-peak ripple voltage is around 0,03 V for 50% pulse width – in other words, when you set pulse width value in Arduino to 128, the output voltage after filter will be not constant, but slightly changing (+/- 0,015 V with 980 Hz) as carrier signal will not be filtered entirely. You can always make the circuit better by using more advanced active designs, like f.e. Sallen-Key I used in my Korg Monotron Duo LFO to get more aggressive fitering.

The last piece of the puzzle – output buffer build around MCP6002 rail-to-rail opamp. As we are not shure, how Volcas internal inputs looks like, it is safer to use an output buffer to protect our Arduino and separate LP filter from Volca Modular internals . Free advice: get some MCP6002, they are very handy for battery and USB powered synths.

Generally speaking, there are 2 basic approaches to microcontroller based signal generation:

PWM signal generation itself is implemented with analogWrite() and delay() functions avaliable for Arduino platform. There are better ways to do this, like writing directly to ATmega Timer registers in carefully chosen PWM mode and using Timer overflow interrupts for precise timing, but you’ve got all that to come. In this short tutorial I will cover only basic waveform generation and give you four examples – all tested with Arduino Nano:

Fell free to use the sketches and modify them as you wish, you can’t damage your Volca Modular in this way (at least in theory). In all sketches, delay() is responsible for output signal frequency. The higher delay value will be,  the lower resulting frequency.

Sawtooth waveform is most easy to generate. The only thing you have to do is just increment pulse_width and after it reaches its maximum value, reset it. For instance, in presented sketch ~1 Hz sawtooth is generated.

And what the resulting waveform looks like (after the filter)? As you see, it is not a perfect saw, but at least it’s close to 1 Hz. Due to too low PWM frequency (and therefore low filter tuning) the slopes are not perfect. Now it is not a big problem, but with sequenced waveforms we will get compulsory slides between “notes”. We are also losing some of the waveform at the bottom (it should reach  0 V at the beginning of each cycle).

All the values are stored in STEP_VALUES[3] table. After time set by STEP_TIME passes the counter variable is incremented and new value is written into pulse_width variable. Unfortunately the PWM frequency is too low to create 8-bit style fast arpeggios. But if can live with a bit of distortion, you can for instance make the LP filters cutoff frequency higher by replacing 470nF by something like 220n (not tested) and go wild with C64 style music.

The circuit output waveform looks as following. The slides between levels are not intended – as I mentioned before, the problem lays in too low PWM frequency and LP filter tuning. Of cource it can be solved by changing generated waveform frequency to lower 🙂 …or just moving to other waveforms generating techniques utilizing direct access to ATmega timers and interrupts.

Now, much slower waveform is generated then in previous example. The period of a waveform is close to to 25 x 100 ms = 2,5 s, as we expected. The offset ~680 mV offset is intended – the lowest value of STEP_VAL is 64 (1/4 of maximum possible output voltage). To get any musical result, the waveform should be rescaled in Volcas utility module to hit the notes.

Lookups are my favourite – fast, you can generate any waveform you will imagine – memory size is the only limitation. I used this technique in my Monotron DUO to add an LFO, in Simmons SDSV hi-hat expander for metallic waveform generation and in Manutronix Dub Siren for LFO with customizable waveshape. The only thing you have to do is to read the consecutive table values and output them. The problem is – how to get the table values? Stay tuned for the tutorial on lookup table creation!

We hit a 0,125 Hz frequency quite good, the waveform itself looks not distorted – at least not as much as previously generated. The base frequency is equal to 0,125 Hz and third harmonic 0,375 Hz – we are far away from filters cutoff frequency which is set to 5 Hz. As we used a lookup table, just by switching it we can generate (almost) every imaginable waveshape!

Let’s put it all together!

Actually, there is not much to put together. As you can see, I connected my Arduino Nano via mini USB to supply the circuit. D5 is the PWM output from the Arduino and 3 visible passive elements create the filter/voltage divider. Output buffer is supplied from Arduinos PCB (pins 5V and GND). In addition I used a Mini Jack break out board to simplify the connection to Volca Modular (Jack inputs and outputs are the only points you can reach Volcas ground). And thats it!

I created a basic raw demo to show possibilites of using Arduino as modulation source. I will leave the whole creative/musical process up to you, as I suck at music production. I used all the sketches presented above, so you can easily replicate the results. Moreover, you can try to generate two waveforms at a time, one 980 Hz pin on Arduino Nano is still free!

Remember, you use all my sketches and ideas on your own responsibility. Don’t send me broken Volcas 🙂