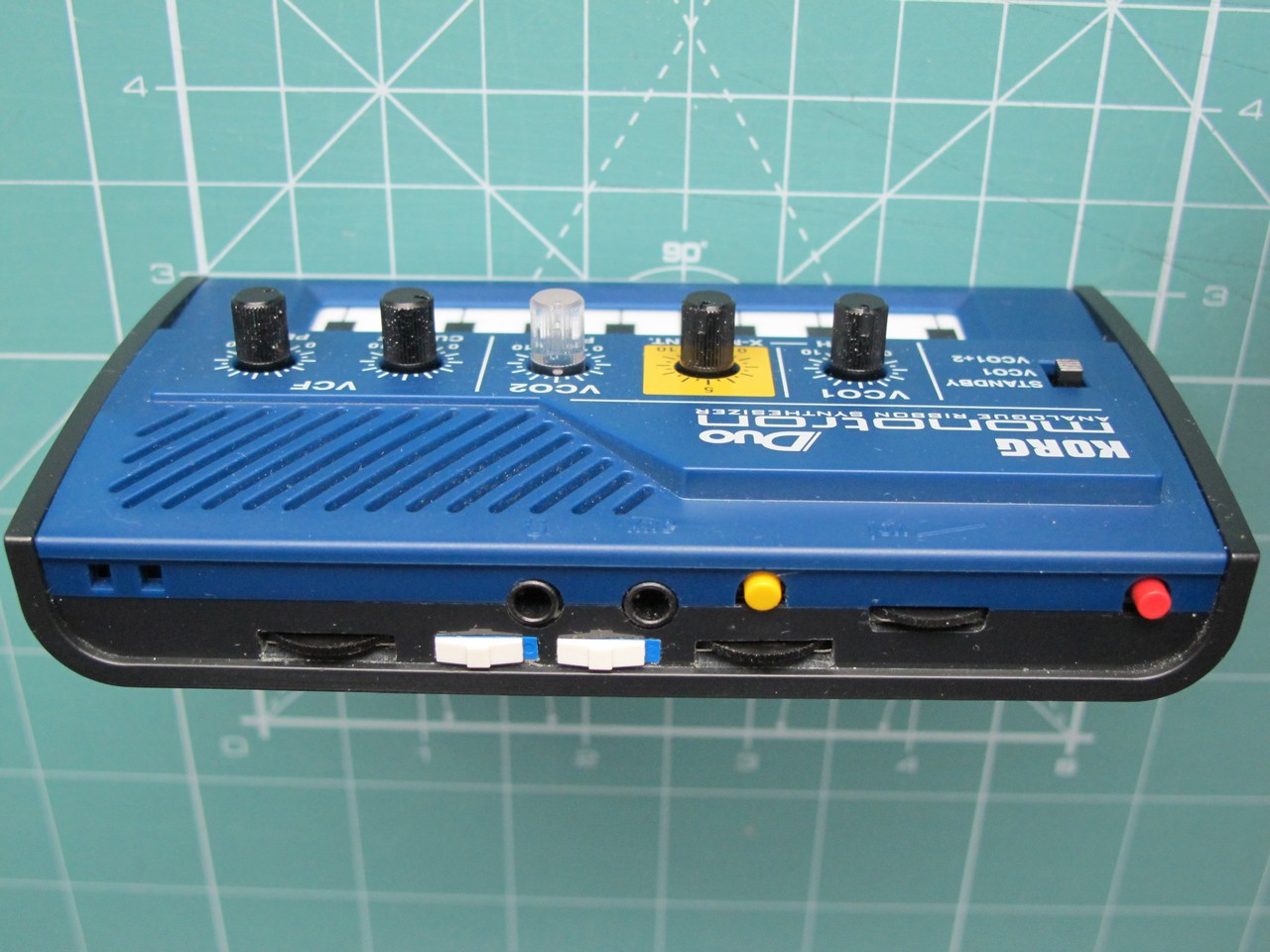 When I first saw Korg Monotron Duo in 2014, I thougth: “Nothing to do here”. Mod points were quite boring, even with schematics there was not a lot to do. With Original Monotron, or even Delay, there were some exciting and very simple hacks. So I bought a Monotron Delay, modded it and forgot about his blue brother.

Few weeks ago I was cleaning my hard drive and saw Duo schematics by accident. Mod points were still boring, but I found some other interesting things I didn’t think about before:

Now the problem was how to put it inside Monotron along with all pots and switches. From my small experience with Delay I knew I could fit: 2 pots and 4 switches or 2 pots, 2 switches and 1 pushbutton. I wanted an LFO with frequency and modulation depth control, so only option one left. I had to skip a lot of cool ideas 🙁 Finally I decided to add an LFO, suboscillator and a second waveform for one of VCOs.

I have connected wires to all Monotrons mod points and checked the waveforms with oscilloscope. Squarewaves are 50% and come from GND to near VCC, sawtooths unfortunately have low amplitude (1, 12 V) with very uncomfortable 2,86 V offset.

VCO2 squarewave amplitude is slightly lower due to additional modulation circuit around Q3.

GATE signal goes from GND to about 3,44 V as long as ribbon keyboard is pushed.

So. The square is just begging to be used with microcontroller, sawtooth needs to be scaled (amplification with negative offset).

I ended with following circit.

The upper circuit scales the SAW1 waveform – amplifies it and adds negative offset. Lower is based on Atmel ATTINY44 microcontroller and adds LFO and suboscillator. Microcontroller runs on internal 8MHz clock generator, software is slightly below 4 kB. I used this specific uC because of quite small (and easy to solder) SOIC14 package and build-in ADC. Opamp is Microchip MCP6004, cheap and rail-to-rail. Digital to analog conversion is done via 8-bit PWM. Sallen-Key II-nd order 120 Hz lowpass filter removes PWM carrier (cutoff frequency seems a little low but is ok for LFO).

The values of the pots (20 kB) were chosen by the lady in the electronic shop – it was the only “walkman type” pots she had. For other values you have to recalculate R8 (for 10 kB it will be 6k8). The R4′ resistor is to tune the sawtooth waveform offset – it has a value between 0 and 1k Ohm and should be soldered after installing PCB inside Monotron (there is a description on the schematics).

Most waveforms generation is based on DDS, the random ones uses 16-bit LFSR (Linear Feedback Shift Register). One cycle of each non-random waveform are stored in 8 bit x 256 table (I store saw shapes also, but they could be computed as well).

They can be divided into categories:

Suboscillator uses external INT0 interrupt to detect the positive squarewave edge from SQR1 point on Monotrons PCB. On each detection the suboscillator output is negated – this way SQR1 waveform frequecy is divided by 2.

The code has about 500 lines (mostly tables) and compiles to 4038 bytes. Ready to burn HEX file is at the end of the post in supermodderpackage.

The idea was first tested on prototype board with thru-hole components, then moved to etched on-sided PCB with SMD parts.

The final SMD PCB is about 18 x 32 mm, it is a problem to fit something bigger inside Monotron. All resistors are on 1206 package and caps in 0805. The ready-to-print PCB as pdf can be found as attachment zipped at the end of post.

The PCB is really easy to solder with some soldering flux. Even without advanced SMD skills it should be a pleasure 🙂

PCB is ready, now the drilling and filing. The pots are some unknown “walkman type”, switches Excel Cell Electronics ESP1010 and pushbutton Omron B3F-1062. All are glued with Autoweld CX-80. From inside it looks awful. Pots and slide switches fits under PCB and are only 2,5 mm high.

The only Monotron PCB mod points used are SQR1 (for suboscillator), SAW1 (as second VCO1 waveform), VCC and GND (for microcontroller and opamp supply). For wiring I used kynar.

The implant PCB holds on thin transparent laser printer foil to keep it in place and protect againt shortcuts (wires are connected thru-hole).

After resoldering speaker wires and closing the device, everything looks perfect. This is how Monotron DUO should be from the beginning. Slide switches may seem to close to the jacks, but they are just fine.

How it sounds? I don’t want to say it is impressive, but compared to stock device it can really make some amazing things. The demo is short and shows only few LFO waveforms.

Do all mods for your own responsibility. You may finish with dead or amazing device. The choice is yours.

12 thoughts on “Monotron DUO with LFO”