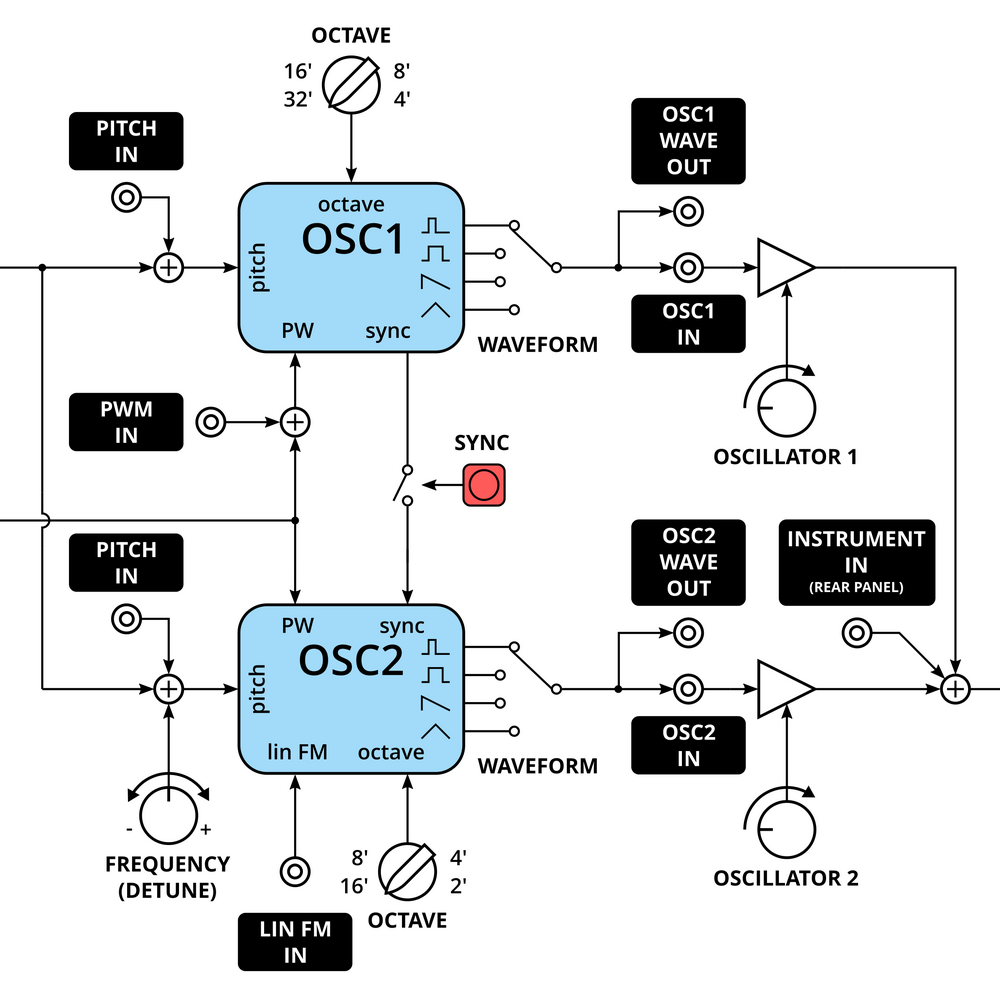 As I deal a lot with system control block diagrams, I feel in power to say something about synth block diagrams, as they seem to have a lot in common. I analysed a lot of drawings from different synthesizer manufacturers and decided to create my own Inkscape template to simplify my documentation process. So if you are already feeling bored just skip to the bottom of article, as I am going to complain a lot.

Why do we need rules ?

Synths are all about signals – their generation, processing and routing (duh!). All those things will be reflected in a synth block diagram. You can create your own rules of drawing – but you must follow them. Tight rules will increase chances the future users of your equipment will understand what you try to tell them. I think the most important guideline for all kind of diagrams and schematic: keep them consistent. Lets move to some examples, shall we?

To show what am I talking about, lets look at following example of inconsistency (from Moog Grandmother official user manual). The first question: What accually the box represents? If you look carefully: a generator or signal processor (ENV, NOISE, SPRING REVERB), a part of user interface/function (SYNC), input or output (MOD RATE IN, LIN FM). You can used to it, but still it is hard to read.

Because there are no arrows to show the signal flow direction, you have to trace the signal to knew what it represents. For example, try to trace top signal /to LADDER FILTER. You can tell  it’s a cutoff modulation from MOD OSC. But what the signal to FILTER from ENV AMT does? Probably also modulates cutoff, but you can never be shure 🙂 Can you tell, which OSC is synced to which? No. Everything should be clear from the beginning, without guesses, which here is not.

But you can notice stranger things:

Ok, maybe I’m a bit to harsh and just understood intents of the Grandmothers diagram designer incorrectly. After all those complains I must say: Grandmothers manual is really great!

Let’s look at the block diagram of the Korg MS-20, a synth with a complexity similar to Moog Grandmother. Main audio signal path is on the top of chart, with modulation sources under it. Every grey block has a clear function – a signal generator or processor. Inside a block all physical controls are listed, so you know what to expect from the user interface. Waveform visualisations with voltage levels and VCA/amplifiers as triangles are a nice touch. But also here some things could be done better:

When drawing synth block diagrams, an often problem with mixer section occurs: on the one side it is a signal processor, on the other just an amplifier. In later diagrams Korg draw it as a set of “triangle” amplifiers with summed outputs and I thing this approach is the most legible. You can check it on Korg Monologue diagram presented below.

That it would not look like I am some kind of Korg fanboy, look at diagram of Monologue. Literally a big step back.  In comparison to this, MS-20 one is outstanding. Figure out for yourself what could be done better!

Sad to say, another chance of showing user a lot of useful information was wasted.

My guidelines to synth block diagrams

Time for me! I think a block diagram is a great way to present a condensed information about synthesizers features. General rules for block diagrams I (try to) use are:

My synth block diagram template was strongly inspired by the one from Korg Monotron manual, just slightly tweaked. As I said a lot of unpleasant things about Moog Grandmother block diagram, I decided to redesign it on my own.

This is what my attempt to show how the Moog Grandmother functionality looks like. It would be a failure if it turned out to be worse then original 🙂 I double-checked it and really tried to avoid any errors.

It may not be perfect, but is close to what I have imagined.  I thought it will be smaller 🙂 Lets look closer what have I changed in comparison to original Moog diagram:

If you like the Moog Grandmother alternative block diagram, HQ version waits for you here.

Here’s a small gift – an Inkcape template you can use to create your own diagram (in *.svg and *.pdf). It uses Open Sans font and 10 px grid, thats why it looks so good 🙂 There is also an small example diagram of a simple synthesizer. Template covers most basic synth generators/processors, signal handling elements and user interface controls. Use it under CC BY-NC-SA licence and have fun!

This supossed to one-beer article and it ended as always :/ Hope this one will be really useful!

All block diagrams from Moog and Korg were used for instruction/comparison only.