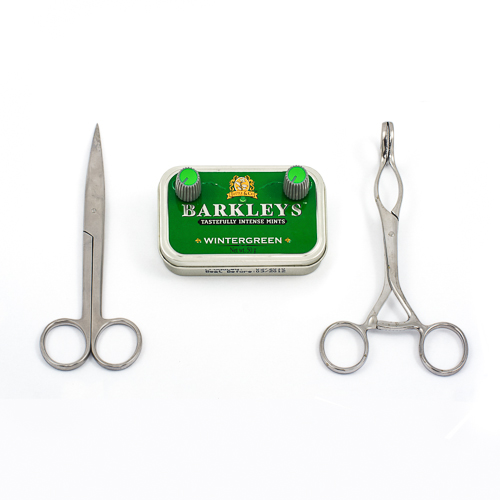 Prices for this deadly device starts from 25$ (!)(*) and according to some descriptions, it’s intended for intermediate DIYers (!!). It is a popular project and, i must say, at first sight I thought it is very trashy. One chip, two potentiometers – not very finesse, but I decided to give it a chance.

The circuit itself was published for the first time circa 1980, and its author name is Forest M. Mims III. Back then it was called: „Stepped Tone Generator” and this name well replicated its functioning. After the year 2000, the crew known as „Kaustic Machines” added one resistor at the original circuits output, threw small speaker and changed the project name to “Atari Punk Console”. The new “designers” name defeated in an unequal battle the old “engineers” name and so, to this day, the device is known as APC.

The device, contrary to it’s appearance, sounds pretty interesting. There is no breakthrough, but far much better than you would expect. Turning knobs gives a lot of fun, you can even attempt to compose some simple tunes – demo below (those are not my legs).

(*) Update 19.12.2018 After I revisited my economic knowledge, 25$ kit final price usually means around 8$ in electronic parts. So, 25$ seems quite ok if good quality components were used.

But why, why does it sounds like this? APC includes in its structure a dual 555 timer IC. As an „explanation”, how this circuit works, many sources will tell You: “first timer operates as a astable multivibrator and the other one as a monostable multivibrator .” What does this mean ? The first timer generates a square wave , and the second generates pulses – the pulse generation is clocked by a signal from the first circuit – as an effect, a square wave occures at the output. What the potentiometers does? The first pot determines the operating frequency of the first generator [1] , and the second [2] the width of the pulse created by the second generator.

The questions kept coming up again and again, like bubbles in a case of soda. What does this have to do with sound ? And where’s the original name “Stepped Tone Generator” comes from? Why there are any steps? Why cannot I figure out which potentiometer is responsible for which parameter of the sound I hear? And where the hell was l? 🙂

As already mentioned , the first timer generates a square wave at specific frequency. The second one creates pulse of predetermined length. Now we consider two cases: we play with generator [1] and [2] we leave alone (case 1 in the figure) and vice versa (case 2) . All is nicely and coherently explained below.

The device was embedded into the metal candy box, and the cost of build closed in 4$. Remarkably simple design, made using small proto board. The biggest problem, surprisingly, was to make holes in the metal sheet. Below drill diameter of 3 mm everything goes well, but above this sheet begins to mess and bend – fortunately grindstones are perfect for this job. Anyway, it came out nicely. Friends liked so much, that I had to build few more.

This one was build in Fisherman’s Friend metal candy tin. The “on” LED is on the ships mast.

Due to different potentiometer position, the PCB size and placement differs form previous version. The best thing about APC is how clean it looks .

If you find a spare hour, build one. It can be your beginning into synth world! This one was my inspiration for later OneBiter synthesizer.

On 24.04.2018, in Poznan, Poland I was holding a DIY Punk Console  Workshop. Many great deviced were build, just look at this! The cost of a finished APC was around 14$, with Visaton speaker, original licenced Star Wars Stormtrooper case and 4x AA battery.