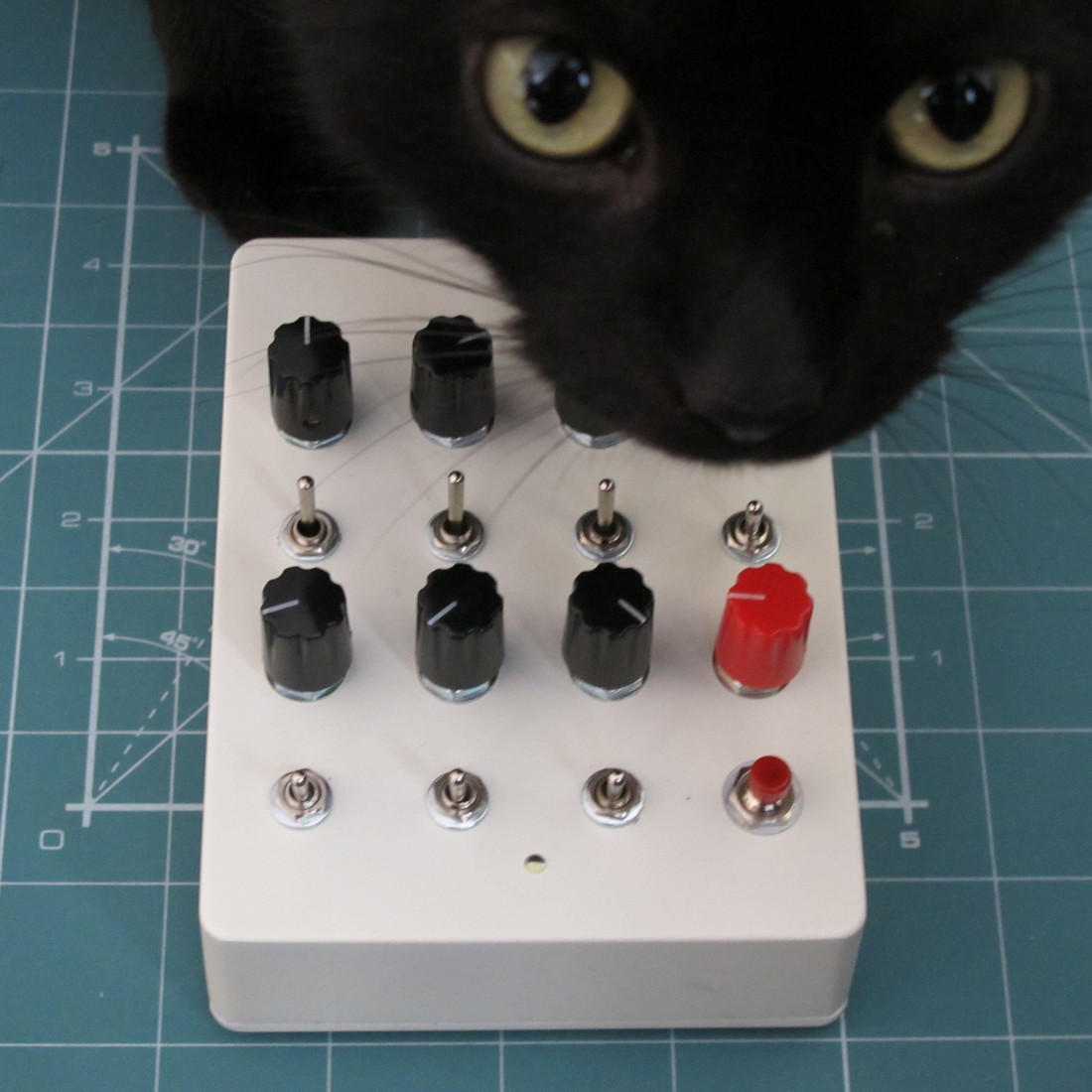 If you ever build cacophonator DIY syntesizer, you probably experienced bleeding from your ears. Catophonator (derived from bunch of screaming cats) is more “gentle” version of cacophonator and allows for some more “musical” results. Or more unmusical, it depends on what you like. The circuit is very simple and synthesizer can be done within few hours. Now look at the schematics.

The smart starve / modulator circuit comes from cacophonator. The rest are just popular ideas of 40106 utilization. Gated oscillators / switchable timing capacitors / diode mixing – Schmitt trigger based noise synth standard. RANGE SWITCH in LFO / HFO circut allows oscillation range change, so circuit can work as low frequency or high frequency oscillator. The outcoming signal can be used as gate source for next oscillator or fed to mixing chain – the selection is made with MOD / MIX SWITCH. Mixing can be done with resistors (traditional analog mixing) or diodes (in fact diodes forms an OR gate). The circuit is very easy to make “in the air”, without PCB.

Building in a can was not a very smart idea. Many joints were too stiff and broke while using device, resulting in unpredictible behaviour. I have to rebuild it in more elegant enclosure.

The first Catophonator was a failure. The circuit worked for some very short time (like 15 minutes), because of “excessive artistic approach in spatial circuit design”.  I had to rebuild it. I also added some new features and made a demo.

I will say it one more time. Sooo… An unusual starve circuit and LFO modulator design is inspired by Cacophonator DIY synthesizer. The gated oscillators come from MFOS Weird Sound Generator. External gate circuit doesn’t work very well (it was also noticed on electro-music forum, where I got this idea from), but it makes some effect (especially with drum loops).

There is also small, white, superbright LED, indicating ON state. I had to increase capacitor bank value to get the circuit run for satisfacting amount of time – the LED also need some current to work.

I final version I haven’t used desiged front panel, I decided to leave the front panel blank, to give it “clean” look. But it is printed and glued on the back, acting as a crib sheet.

I made an error and used opamp instead of 4049, so I had to make an ugly conversion, which I covered with red tape. Two Jacks and two pots forms a 9V battery holder. Not a perfect solution, but works quite well. The wires are long, so I could remove the PCB and make some tweaks without excessive cutting / soldering.

And a brand new demo:

It is not the best synth ever, but simple to make and can create a lot of strange noises!

One thought on “Catophonator – your cat will love it”