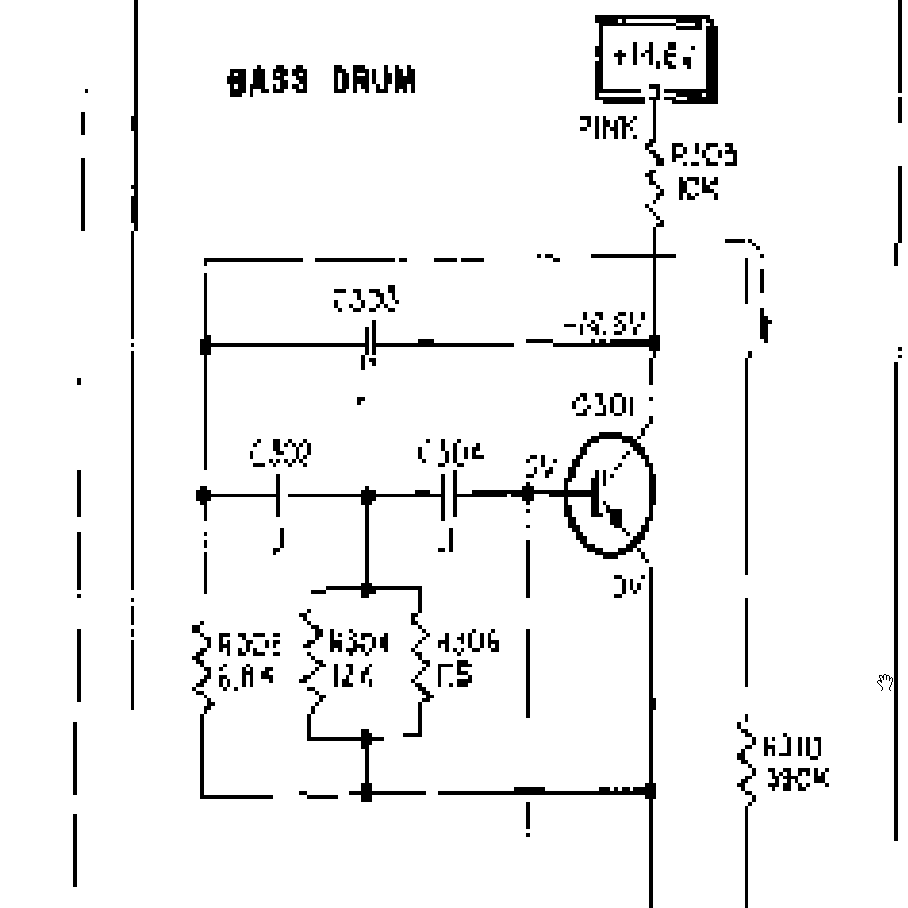 Kraft Drum (aka V829 Drum) is a Vox Percussion King inspired device. VOX PK is quite rare drum synthesizer from about 1967. The most noticable use was on Kraftwerks track called Autobahn – you just cannot miss this punchy and somehow distorted bass drum.

First, I got some lovely Vox Percussion King HQ schematics (top of the post). Then I sampled carefully selected youtube videos, showing Grandmaster Flash performing on his vintage Vox and of course tried to reach clean Autobahn Kick to get some material for future comparison. First of all, I breadboarded the drums core and compared its output to the original samples to get proper values. Then I’ve enclosed it with input and output circuits to met eurorack (and my) standards.

I’ve added the trigger pulse input and redesigned the RC envelope generator, to get rid of annoying retriggering and clicks. Then added a simple I order high pass filter acting similar to tone control circuit from Vox Percussion King. The idea was to cut the bass and boost everything else to get this funky fart sound. Because the device output level was quite unpredictible as it depended strongly on PITCH and CUTOFF, I’ve added a simple diode limiting circuit to protect my ears and monitoring devices. At certain settings it causes very pleasant distortions, so it stayed (with ON/OFF switch).

The last conception was an impact tone (or attack) generator, but I noticed it removed the “laziness” from the sound and added more punch – I didn’t included it in the final design as it gone to far from original and feel too modern. I also played with II order Salen-Key HP, but it cut too much lows.

You may say there is an opamp buffering overkill on output stage, but I used quad anyway, so it was better to make an buffer then leave it unconnected and alone.

There are only 4 controls:

After breadboarding it was time to move onto PCB. Design is simple, so is the board – one sided, only 60 x 45 mm and no hardcore components.

Eurorack 2×5 power connector is also there – it is good to stick to the standards. I made a small error and soldered polyester cap in trigger LED circuit, ceramic would do the work at the lower cost. I also try to make a simple wire color coding: blue for ground, red for +V, yellow to trigger / output / CV signals. It really helps durning debugging.

After the circuit was complete, I moved it to my trusted box – it helped me build Prodiż, SnapClap and 808 Rim Shot, now the Kraft Drum. The last step will be panelizing and adding to my neverending modular.

Finally, a demo. Very raw and minimal, just bass drum and me. If you want to sample it, call me for wave. Sounds very like the original Vox Percussion King kick.

Thanks for reading and watching,