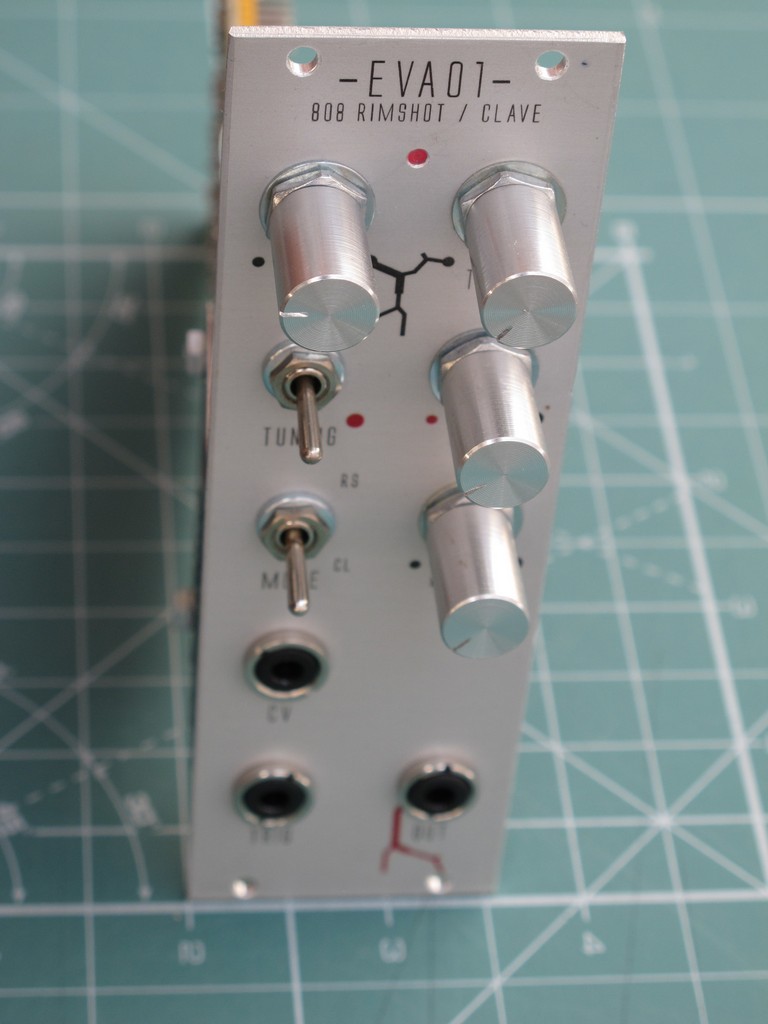 On Monday I have noticed, I don’t have a TR808 rimshot module in my drum setup. I decided to make one.

808 sound modules ale very popular in eurorack world, so the first thing I did was some small research. I found modules from Acidlab (8RS), Analog Soultions (RS88 and CL88) and  TipTop Audio (RS808). Original rimshot / clave circuit have only LEVEL setting (and RS/CL selection switch). All manufacturers added TUNE control, TipTop Audio went step further and implemented SNAP setting, Analog Solutions was able to split this simple circuit into two very simple ones (separate RS and CL modules). I’ve spotted some more potential in the curcuit, so I gave a try to modify it slightly.

Roland made a great job by making clear service manual for their TR808 drum machine. I marked some possible modification points.

The idea is quite simple: we have two bridged T-network generators (first (GEN1) build around IC21, second (GEN2) around IC20) excited by triggering pulse. For RS output of both generators is mixed, send to VCA (build around Q62) and filter (Q63). Envelope for VCA is formed by R107 and C24 (between D61 and D63). Part of GEN 2 acts as buffer. For CL setting GEN1 has no impact on sound and GEN2 topology is changed by addition of feedback loop (R313). VCA and filter are not used here.

The ideas for modding (marked red) were:

After some time I noticed I don’t know how actually real clave looks and sound like. From what Roland presented, it was some kind of “ping-machine” 🙂 I downloaded some samples, looked at spectrograms and decided to improve CL circuit by adding third generator. It works at the same frequency as original GEN2, so you can use tuning knobs to get detuned oscilators sound. The schematic looks like this:

All parts are very easy to get, no obsolete components here.

I have designed the PCB with some mod points, etched it, then started to test if all mods have sense. My trusted synth shoebox was very useful.

Most modifications were uninspiring and made “meh” difference, so I stayed with the generator tuning knobs and third extra generator output level. As always I’ve added some trigger indication LED – very handy in the first stages of any troubleshooting (and blinking modular looks also great).

The last thing was to make a front panel, wire the whole thing and put it into my system.

Front panel is made of oxidised aluminum with water decal on it. This combo looks well, is quite easy to make will last for a long time (I hope).

I named the device after one of the Evangelion movie “characters”. There were some little tweaks in the circuit after I soldered the PCB, so some components (resistors) are mounted on the front panel switch (the mods are already on the schematics). The module controls are:

And how it sounds? Like 808 rimshot. The clave sound is much more alive now in my opinion.