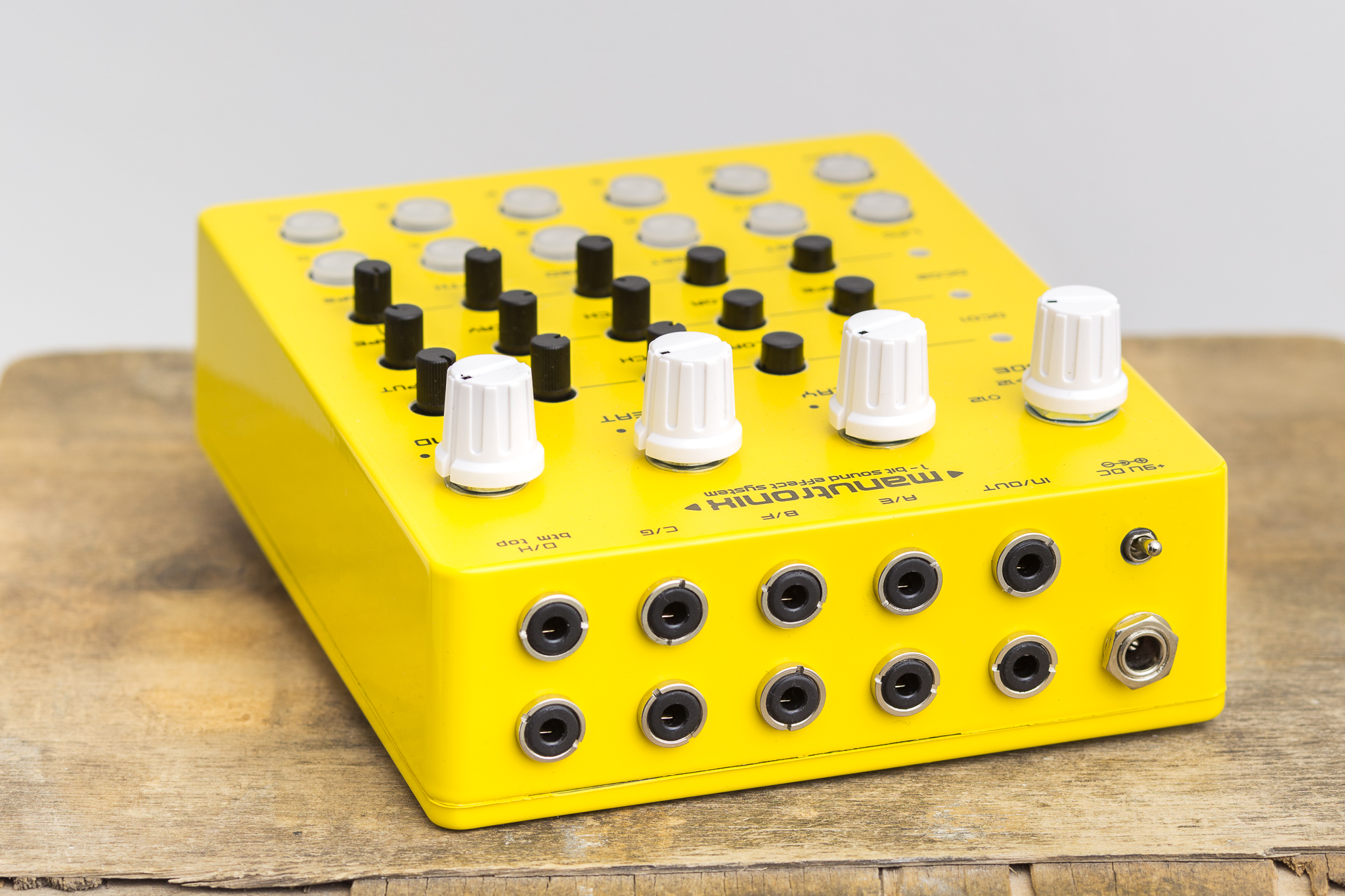 I was making synths and stuff, while my girlfriend played on Youtube a Manu Chao live performance. I noticed  some familar sounds I knew from my childhood – the Executor keychain, true classic (there is also an Android app thats imitates it).

I made some research and I found a specialized, proffesional device destined for this kind of lo-fi, arcade-like sounds: the Rigsmith SGE-1 dub siren. The set of sounds from Rigsmith was very similar to Executor, so there sould be an avaliable IC that makes all the work. On Aliexpress I found a small kit called „16 Music Box”. I bought it, launched and, unfortunatelly, my favourite “bomb” was missing. There was only one way: to code the synthesis engine by my own.

Before I touched the soldering iron, I looked at original Executor waveforms and read the specs of Ricoh 2A03 IC from NES game console as additional inspiration.

So, what have I done? I finished with somehow strange device, something between advanced digital dub siren and drum module with modular synth connectivity.

The device is based on Atmel Atmega16A running at 16 MHz. The microcontroller is responsible for:

74HCT32 sums the external trigger signal and button value that finally reaches microcontrollers pin. ULN2803 is responsible for driving trigger buttons LEDs. The output is buffered via opamp. The circuit is divided into 2 PCBs.

I made a partial prototype on breadboard. There are many repetitive parts of the circuit, so I checked only if idea is ok. Making a full prototype would be very painful – too much pots and switches. I have divided the circuit into 2 parts: “interface” (knobs, switches etc.) and “brain” (ICs). All PCBs were home made and I don’t like to make double-sided circuits, thus a lot of clamps.

The “interface” and “brain” PCBs are connected with 2,54 mm pin headers. The pots are Alpha Taiwan, switches with LEDs – Highly.

Both boards have the same size and fit together like a sandwitch. “Interface” PCB has a lot of holes to mount it to front panel, especially near the buttons – a lot of force can be applied here while jamming.

The tests went quite good, I didn’t make any significant errors – except lack of 4 pulldown resistors (but the schematics are fine).

I have used very nice yellow Hammond 1590XXYL enclosure. The factory painting was very good and I had no problems while drilling.

Inside I have glued a metal spacers to hold the “interface” PCB with AutoWeld adhesive. Not all holes in PCB were used, but it is fixed very well.

Later I made some test to choose the perfect knobs (those below were definitely not good enough). I also printed the front panel design to test if everything is clear and no text in covered by knobs.

Then, at last, I put a water decal on the front and secure it with transparent acrylic paint, then fixed it in an oven (~175 Celsius). The enclosure was ready.

Only the “interface” board is screwed to enclosure, the “brain” holds only on pin headers, I made a stupid mistake and placed external trigger pads on the wrong side of PCB – I had to add long wires to connect them to jacks :/ Small LED on “brain” PCB indicates the presence of power supply.

All 3 PCBs (with delay) fitted almost perfectly. Wiring is a little tight and I had some problems to close the enclosure. There are additional connectors near jack sockets, so I could remove a PCBs for troubleshooting without soldering.

As I said, the sound generation is 100% digital, with 1-bit output (common for all generators). The engine uses: squarewave generator, noise generator and low frequency generator – quite simple structure.

It is not WYSWIG and can be a little hard to understand. In general, there are three main sections:

Each sound can contain 1 or 2 stages (for example: 1 second of squarewave – I stage, then 0,5 second of noise – II stage). Stages, marked on front panel as DCO1 and DCO2 can be loaded in one-shot mode, in series or looped.

All controls are described below in details .

There are 4 modes of sound playback, or in other words, how front panel interface is read by synth engine:

There are also mini jack connectors on the top of device – you can trigger saved sounds with f.e. Beatstep or modular system:

The sound is crisp and clean as hell. Believe me, my cat checked it.