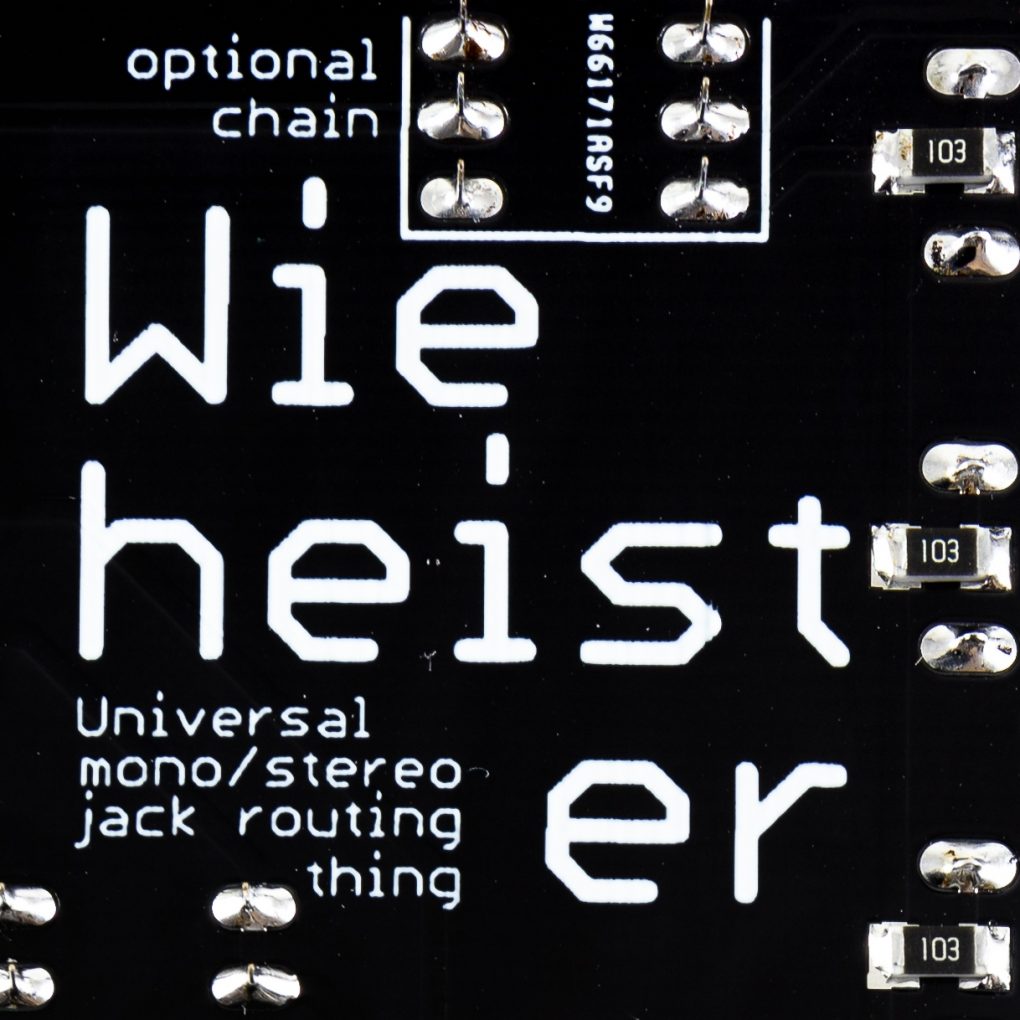 “Wihajster” (from German “Wie heisst er?” – “What is his name?”) in Polish language is a word used if an actual name of an object do not come to mind. Something like “whachamacallit”. I changed a spelling to “Wieheister” to make it sound more internationally.

The idea for the device came from everyday wire-related strugging – splitting, mixing and muliplying. I’ve got a special instruments for such jobs, but often that one, often extreme simple, was missing. I tried to design a device that won’t be perfect for every job, but quite useful and handy for most of them.

The original device used mono jack connectors and pin headers with jumpers (see drawing above). I had a lot of stereo connectors from different 4sum audio mixer iterations, so I decided to apply passive stereo mixing. The same week I started wiggling with Wieheister prototype Moog Grandmother showed up with its Utilites Mult module, where signal mixing along with multiplying was possible. It was a great idea, and added only few resistors to my final design. Lets move to schematic.

Except resistors, jack sockets and DIP switches there is not a lot to talk about. Wiheister is all about routing. There are four sections in total, where DIP switches between let you connect them in different ways. Look at the schematic presented below:

Device works great with audio, but also with CV signals (no capacitors to remove CD component). By default, if connecting two sections together, all switches should be in ON position, unless you are performing some unusual task, like creating mono mixer, where stereo splitting section acts as multiple mono output. Sections grounds are disconnected by default (which is clearly visible on PCB layout below). Therefore one switch in every section joiner is assigned for GND-GND connection (which is clearly marked on PCB).

PCB layout is very simple – there are only 12 resistors in 1206 package, 16 mini jack sockets (60% of the final cost of the device) and few DIP switches. The spaces between jacks are wide enough to fit standard, not overgrown 3,5 mm plugs. The quality of jack connectors is more then good – I used original Lumbergs, that feel just great (butter and stuff).

Because these kind of devices are often used in chaotc enviroment, the solder side of the PCB is protected with plexi cover to avoid accidental shortcut. It is connected with long, extremly sexy 10 mm HEX screw, where nuts act as 2 mm standoffs. Wieheister is only 93 x 60 x 16 mm and weights 58 g.

Main tasks the device can perform were mentioned in prevous section, but especially for those who don’t like to get into to much technical stuff – here it is.

If sections are not joined (switches not in ON position), they work fully separately (their signal grounds are not connected) and can perform different tasks at the same time. All of those abovementioned sections can be combined via DIP switches to create more complex utility devices, f.e.:

With a little bit of imagination it is easy to implement your own unconventional functions.

PCB is one big cheat sheet, if you inspect it carefully, you will find a lot of useful information. In general, front side tells everything about signals routing – you can track how TIP (usually left channel) and RING (right channel) are distributed. Bottom side of PCB includes a simple info about mono / stereo plugs build and summary of most often used functions. No battery is needed, it is a fully passive device.

I gave few pieces to my friends to play with. My main fear was it will be to difficult to understand what it does. It took them some time to get used to it, but after a few  minutes  they operated the device like they were born with it. Now they don’t want to give it back (really).

Although small and simple to build, the device is a great companion for anyone who has a lot to do with cables and experimental routing – like eurorack users and small portable synths wigglers. It will not replace a real audio mixer or eurorack build-in active multiple, but will become handy in many real live situations. (Now you can get it at patch.audio).

Beware!
If used incorrectly, in very very rare cases Wiheister can be dangerous to some equpment. Be shure you know what you are doing. Think before you short-circuit two signals.