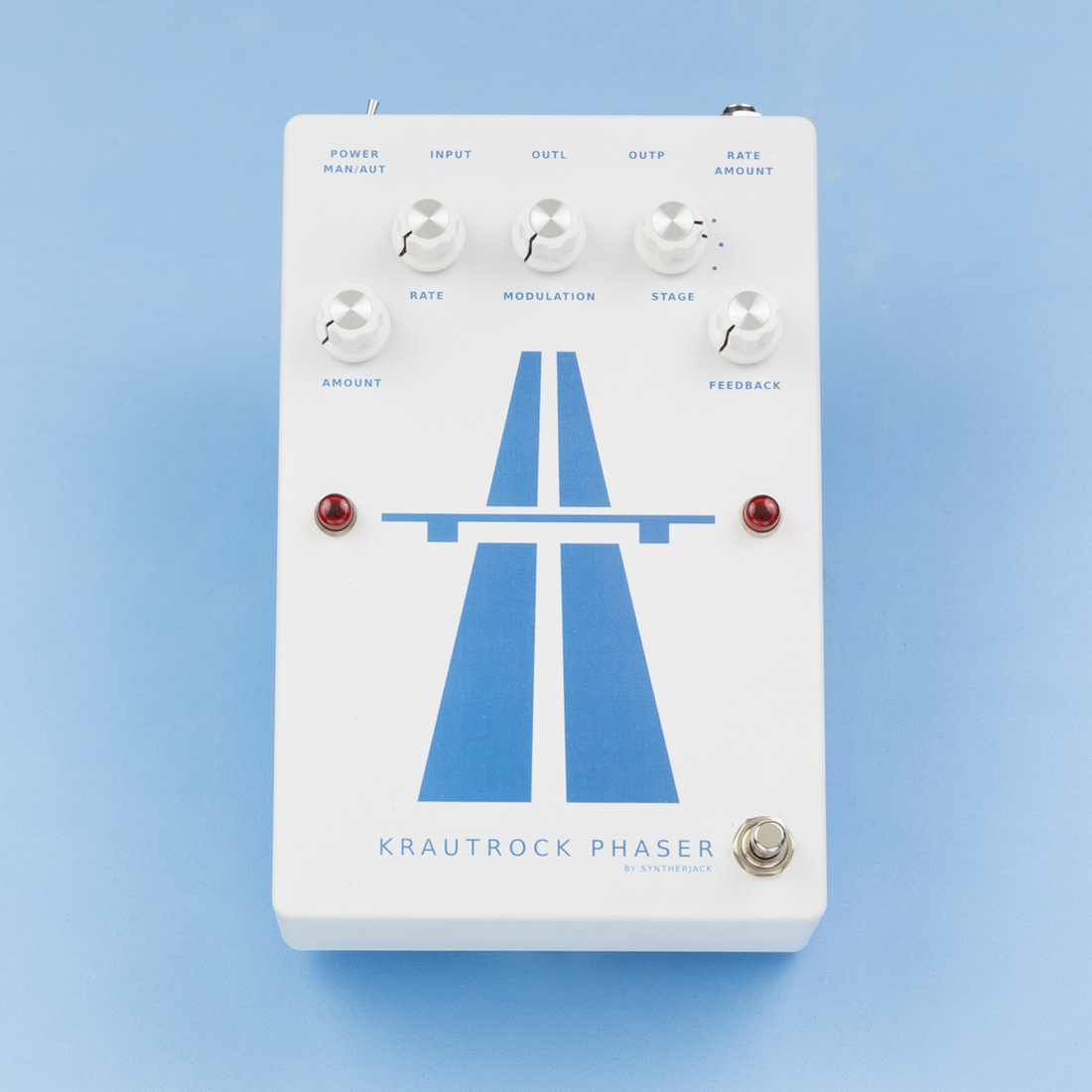 So, after ~1 year I am ready to write some of my Krautrock Phaser build experiences.

It all started somewhere in XXI century when I saw a phaser project on J. Haible site. I though: “There can be nothing cooler then a bulb surrounded by photoresistors”. So I decided to make one device on my own. Meantime Mode Machines launched their KRP-1 Krautrock Phaser for about 500 euro, so I got the unique opportunity to make the almost most expensive analog effect avaliable 🙂

I didn’t make any significant changes here. I got a Thonks rare part kit and replaced silver heat sinks by black ones. All polarized caps are from Nichicon, box type – mostly Kemet, trims – Piher. I put photoresistors legs into insulation I stripped from thin wire.

I performed some small mods:

I made almost 15 designs of the Krautrock Phasers front panel. Let me show some of them. As you see, the main idea was to use a highway sign, the same Kraftwerk used for their “Autobahn” album cover.

What’s wrong with that? Pot knobs put in straight line make them difficult to tweak fast because of small clearance. Captions under the knobs could be larger, but then they would be to close to each other (thats why the stupid FBACK instead of FEEDBACK). So I moved forward and made some minor tweaks.

Later I have experimented with Jack placement aligned with pots. Changed font to Futura (very close to that Kraftwerk used). As I predicted, full length captions looks too messy. Finally I have changed the the BYPASS and RATE indicators position. Keep in mind, there is a large PCB under the hood. The next idea was crazy (at least for my standards).

I replaced the middle knob with big one and arranged all of them into half-circle. This was good, but I’m happy I didn’t used this idea, because MODULATION does almost nothing. AMPLITUDE is the best and it should be in the middle. Then I put two and two together – if the letters have to be white, then the whole box must be painted white or I have to use the white water decal. The best would be blue box and white water decal printed in blue – but then I would have to match blue acrilic paint and blue print. Also, after a long deliberation, I find the use of Kraftwerk “Autobahn” cover on Krautrock Phaser too obvious and somehow kitschy. But I liked this idea so…

I gave up the big MODULATION knob and noticed the STAGE knob is not a pot and should have marked 3 positions – in other case you could damage it by twisting too hard in wrong direction. So I put 2, 4, 6 numbers to indicate the phasing stage. I also moved all pots up – this way some Jack sockets had to be mounted lowered or they will overlap. The last idea was to add minijacks for easy integration with modular synthesizer.

And we are finally here. Stage numbers were replaced by dots – who cares about where the input signal is injected. I also made some kerning work and other things nobody will notice.

I used Hammond 1550G, a little tight, but at least the device doesn’t weight 1,9 kg. The first thing was drilling. Then I have printed the design, sticked it with tape and punched thru previously marked points (black crosses on photo below).

After punching and drilling, there was time for painting. I put 4 layers of Idea Spray Bianco acrylic paint (with a nice creamy white matte look), then put a water decal and painted one more time with four layers of Decor Apa Transparent Satinato spray.

The rest was a pure pleasure, I hate drilling. I made small reflectors for indicator bulbs. They were created from thin aluminium sheet and heat-shrink tube. And it work.

The reflectors were glued to the enclosures top cover. All wire lengths were measured to fit almost perfectly. All big jacks are from Amphenol, mini jacks from Cliff. The switch for AUTO/MANUAL phasing is vintage FAEL from the ’70, with incredible smooth lever operation. Pots are 16 mm type with dust cover manufactured by Alpha Taiwan, and 3-position switch by Ninigi. The red covers under the reflectors are 9 mm OWS13 type NOS from the early ’70, originally used with T-5.5 phone bulbs.

The PCB was fixed to bottom plate of the enlosure via glued metal spacers, along with indicators. Phaser uses 7 V, 100 mA incandescent light sources, which can be hard to find, so I included 2 additional new ones and made a special holder for them (marked as SPARE).

Wiring was easy, just to put plugs in proper sockets. The assembly of the box was a bit tricky, the bulbs must enter into the reflectors precisely.

The white knobs are Boss style from taydaelectronics.com. The total cost of the parts for Krautrock Phaser was around 170 euro. Now I know why I eat potatoes all the time. The photo below was made by my friend, Marek.

The effect is famous from its utilization with synthesizers, so here is a demo with my Prodigy.

After some fun, it’s time to write about Krautrock Phasers “user experience”: