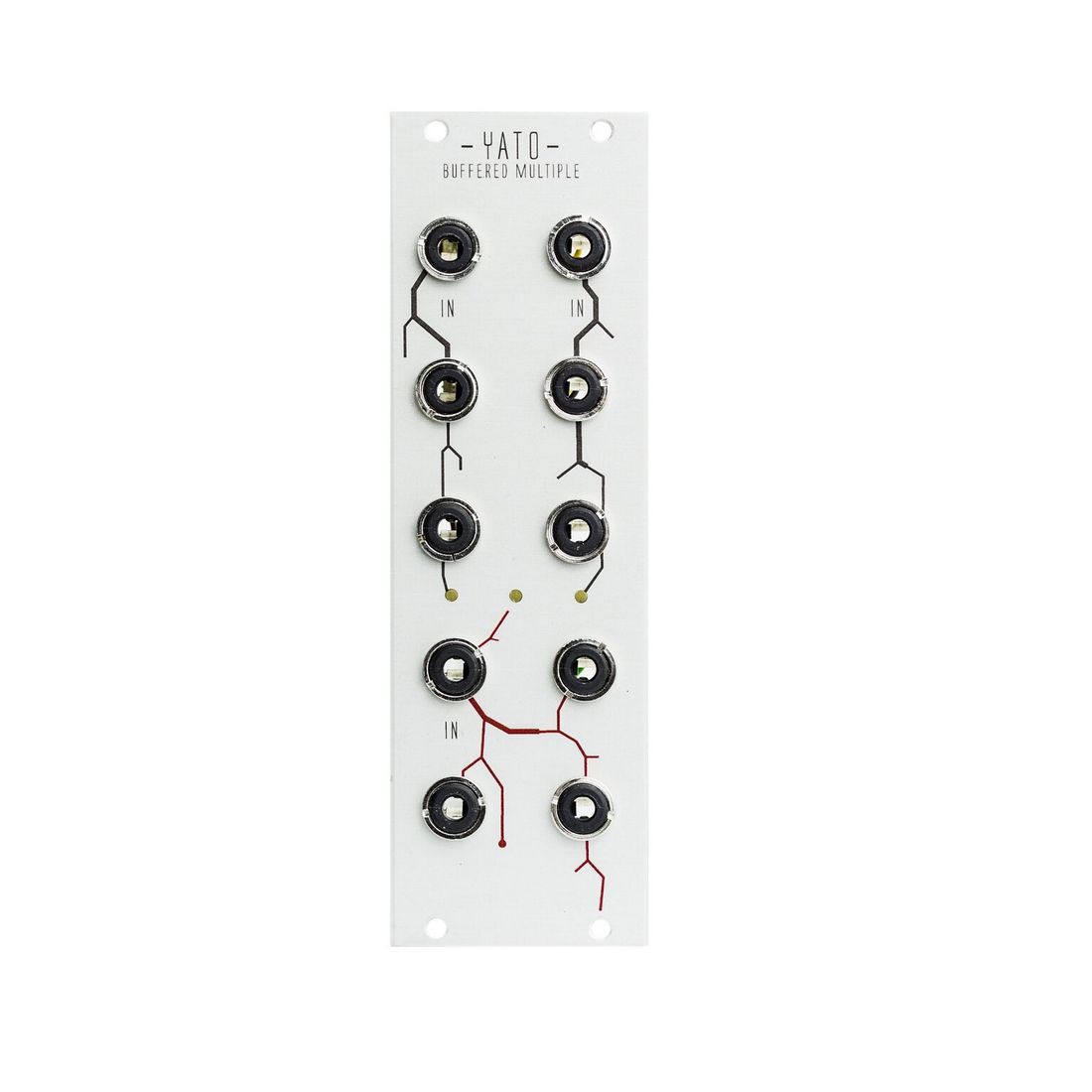 This eurorack multiple project was an excuse to use a controversial quality PJ3410 mini Jacks I bought online (very similar ones are JG3530-2381-000-03, Lih Sheng LJE0352 or CLIFF FC681374V). For 50 pieces I’ve got, 8 was unusable (after I put a Jack into it the internal contacts fell on the other side) and the quality of the rest were rather unpredictible. Therefore I chose the ones with te best feel and thats how 2 Multiplas were born.

The design is based on some popular buffered multiple eurorack modules. It has two 1 -> 2 multis and one 1 -> 4. Each input has simple signal detector, very useful in trigger multiplication (and most of all, I like LEDs),

First od all, I’ve etched a small PCB (one sided) – but you can wire it on protoboard as well. The design uses only 2 IC (8 opamps in total) and is very compact. Furthermore, If you don’t need LED indicators, you will loose 50% parts.

Wiring was very straightforward, seem like great module for every DIY beginner. If fact every multiple DIY kit sold is advertised as “great for beginners” 🙂

The small green PCB hold 3 LEDs. It is screwed to metal spacers, and spaces are glued to aluminum sheet. This way the module can be fully teared-down (for some tweaks for example) and then reassembled. I also hate screws on front panel and try avoid them as much as I can. Jacks ground is connected with bare wire, so you have to be careful to not to make an shortcut.

Some say, it is a waste of euroack space: 8HP and only 10 Jacks? Some manufacturers put 8 in 2HP! The answer is: I don’t like the crowd – it will often lead to user unfriendly designs. Only INputs are marked on the front panel, every other Jack is out. “Root-like” graphic groups sockets and LEDs in [3, 3, 4].

Sorry, but no video this time! Multiple demo would probably be extremely boring.

Some interesting information can be find in “Active vs. Passive Multiples In Modular Synthesis” topic on Synthtopia. The video explains when to use active, and when passive multiples – the conclusion is it depends “on the buffering and output impedance of the module sending the control voltage, and the input impedance of the modules being controlled“. In some cases buffered may be ok, in other – passive. But the most interesting is a comment from one of the users (JR) you can find under the article:

“This would not be an issue at all if manufacturers would stop tacking 100-1K resistors on pitch-critical CV outputs in the name of “protection”. Opamps are more than capable of driving many pitch CV inputs at once with no attenuation and scaling error. And nearly every commonly used opamp has built-in short circuit protection already. It’s a practice that’s been carried over from the 70s (when the opamps of the day actually *were* more sensitive to short circuits), yet tons of modern modules leave it in anyway. And this has nothing to do with The Sound/Vintage Authenticity or anything like that. There are even easy ways to incorporate the protection resistor without raising the effective output impedance, but not everybody does this.

Funny thing is most of these active mults will also add the ~1k resistor on each output, which actually defeats the entire purpose of buffering in the first place because *those* CV outputs now cannot be passively multed. They are repeating the same mistake that they are supposed to correct! […]”

And I used 1k resistor also :/. As an excuse I can say, I will use it only for drum trigger multiplication, so additional output impedance should be not a problem. In other cases it should be taken into consideration.